Hello everyone! It’s not always easy to remember all the beautifully unique birthstones for each month of the year. Now if you’re like me; I find it quite fascinating & enjoyable learning about the many birthstones that are connected to the months of the year. Birthstones are a beautiful expression of symbolism while displaying brilliance in their appearance. When one receives a gift that includes their birthstone, it provides an intimate sense of thoughtfulness; and connection resulting in a heartwarming gift for the recipient. Now, please keep in mind that the recipient can also be you! As it is nice to treat ourselves once in a while… don’t you think? With that being said, I would like to share with you below: the origin (from one popular viewpoint), while listing the names of the breathtaking birthstones that coincide with each month of the year including: a brief description of their appearance, symbolism and fun trivia about each birthstone; plus providing a who’s who; and gift-giving/keepsake ideas that incorporate birthstones.  With this narrative, I hope to share awareness of the beauty and symbolism for a greater admiration of birthstones.  Without further ado, lets dive right in…

To have a greater appreciation for the beauty of birthstones we should explore the origins of birthstones. Having the understanding of the origins and the significance of these gems, will allow us to gain a new perspective and appreciation for the stones themselves and the significance they hold. So with that lets get to exploring….

It is said that birthstones originated from biblical times; along with having a strong link to the zodiac. There are many versions of historical references regarding the genesis of birthstones; one being that it is believed by Josephus that there was a connection between the twelve stones in Aaron’s breastplate. The stones represented the tribes of Israel, as detailed in the Book of Exodus, interconnected with the representation of the twelve months of the year, and the twelve signs of the zodiac. However, there are varied translations and interpretations of the passage in Exodus regarding the display of the breastplate; as George Frede asserted that Josephus saw the breastplate of the second temple not the one that was detailed in Exodus; and by St. Jerome reference of Josephus, shared that the Foundation Stones of the New Jerusalem (Revelation 21:19-20) would be of an appropriate reference in detailing the beginning of the identification of birth-month gemstones.

Origins of birthstones may differ from culture to culture, which adds to the allure and enhances the mystique existence of these enchantingly-beautiful gems. The above shared origin reference of birthstones lends itself to knowing more about these captivating gems. Therefore, lets further explore a quick-reference description of these gems for a better understanding of their significance.

In order for us to explore and obtain a deeper description of the 12 designated birthstones, please see below identified gemstone names, a brief description of their appearance & symbolism, along with an element of fun trivia: 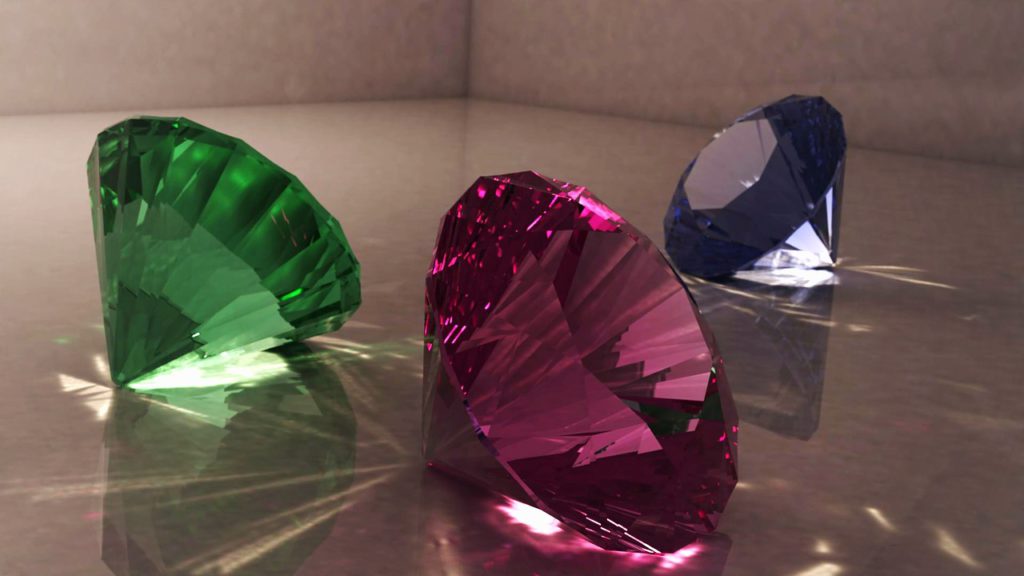 Now that we have explored the shared origins of birthstones; covered their assigned month and meaning; our minds can now be opened to the plethora of gift giving possibilities, found in any price range.  As birthstones are versatile in style and wear; they’re truly the capstone to a captivating look for any outfit. For example, if you have an important event to attend, gemstones effortlessly add sparkle and drama (the good kind).  Further, when you need a look to segway you from day to night, birthstones help in accomplishing your desired goal.

Firstly, let us start with Pearls (June birthstone), and Opals (October birthstone) as they have a natural essence of opulence; and convey a blending of elegance and assertion.  These stunners display well in necklaces, bracelets, earrings, and or brooches; which work well on their own or in an ensemble; while showing well with daytime wear, such as suites, dresses, and blouse- skirt/slacks/jean parings.  As such, you can always transform a casual look, into a more formal and or professional style, by merely throwing on a blazer and a striking set of Pearls and/or Opals… and presto you have a sophisticated look for a short-notice meeting that could occur day or night.  Additionally, Pearls and Opals lend their elegance to any wedding dress, and/or formal evening wear; while being available in array of hues for versatility and contrast such as the colors found in saltwater pearls.

Now we mustn’t forget, what I would call “the lavish four”, the remaining suite of birthstones: your Diamond (April birthstone), Emerald (May birthstone), Ruby (July birthstone), and Sapphire (September birthstone).  These enchanting birthstones are often seen in the most exquisite of settings, such as found in the crown jewels of monarchs; and are regal in appearance, However, one must not feel intimidated by these exquisite gemstones.  Like their sister birthstones, these gems have the ability to add a fabulous pop to any casual garment; and add exquisite sparkle to necklaces, bracelets, earrings, brooches, and tiaras; making them just as accessible as any of the other monthly gemstones.

As you can see, the gift giving ideas encompassing birthstones are endless, from dressing up any outfit, to displaying in captivating arrangements of necklaces, rings, bracelets, earrings, brooches, tiaras, etc.  Additionally, you can find real or simulated versions of birthstones encrusted in jewelry & small keepsake boxes, and hair clips & barrettes; bedazzled book markers, and writing pins… gift giving options are frankly boundless.

It is always a delight to dive into the wonderful world of birthstones.  Learning more about these beautiful gems brings about a more insightful appreciation for their beauty and wonderment.  I hope you found learning about the origin of birthstones; their description & symbolism; a who’s who of notable celebrities that may share the same birthstone as you; along with gift giving/keepsake ideas, enlightens you with a treasure trove of information for a deeper appreciation for some of the world’s first created gems.